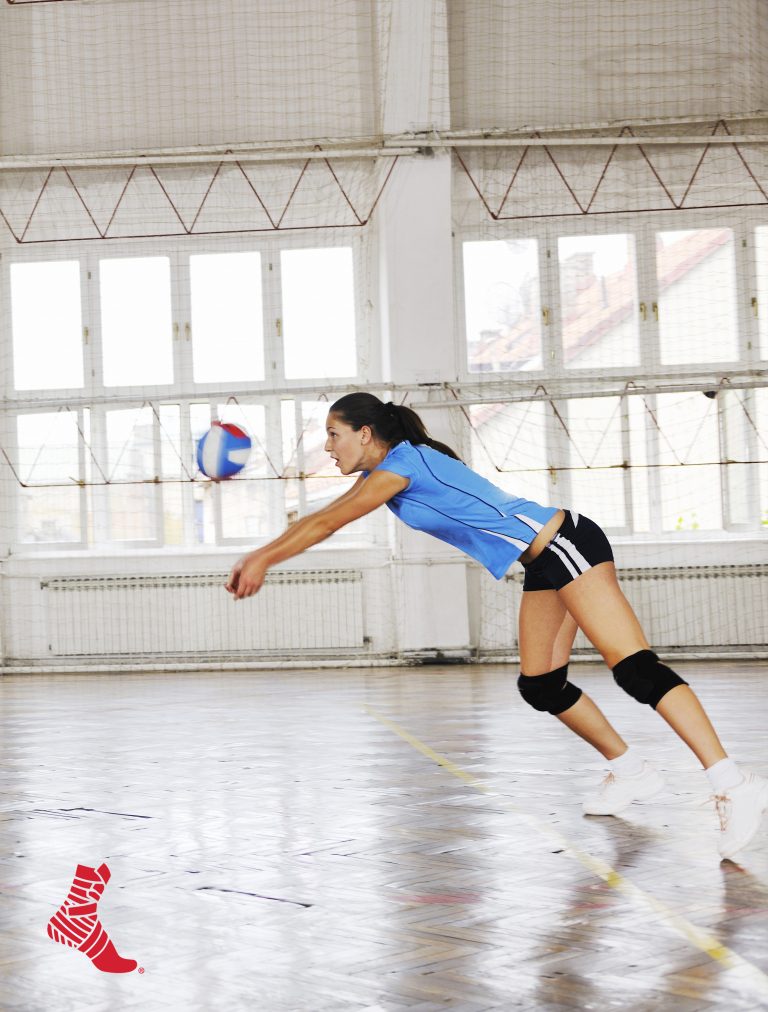 5 Common Volleyball Injuries (and How to Recover From Them)

Common volleyball injuries tend to revolve around the ends of limbs such as fingers, ankles, and toe injuries. Here’s some information on how to avoid such injuries, including prevention techniques, as well as how to reduce injury time after you already have the issue. The goal is always to get back on the court or sand, as quickly as you can.

An injury to your ankle is one of the most common that you can get in volleyball. This is due to the excessive jumping and quick turns. The injury also tends to make it so that you’re on the sidelines for a long time in comparison with other injuries. The important thing when it comes to ankle sprains in specific is that you should make sure the joint is held fast in order to prevent further injury. This also means staying off it. If you feel pain in your ankle and suspect a strain, the best thing you can do for minimizing downtime is make sure that you don’t compound the potential injury by making it move more.

If the pain doesn’t go down over the course of many weeks, however, it may be a good idea to make sure that you go in for an X-ray. It could mean that you have more serious damage to the ankle than you initially thought. The safest way to know that you can return to the game is when you are able to put pressure on your ankle and without pain accompanying it. If it supports your weight no problem, then all should be well in general. It’s always a good idea to check with a doctor if you have any doubts. Walking on a sprained ankle could severe the damage, so ensuring adequate rest time is necessary.

If your ankle is sore, you should do less jumping exercises during practice. Make sure your ankle doesn’t roll over; this is critical to protecting it and preventing further injury. It also helps to avoid hard surfaces if your ankle is sore, since this could aggravate the situation. Warming up the muscle around the ankle is crucial during stretches, including doing light exercise. After the game, you’ll want to go through proper cool down exercises as well.

This injury occurs most often while jumping, especially if you land incorrectly. An ACL injury is similar to the frequent causes of ankle injuries. If you feel your knee popping and then becoming painful, this is an indicator that you might have strained or even torn your ACL. This is especially the case if the knee starts swelling. You may need an MRI in order to thoroughly check for potential problems, if this is the case.

Another highly common injury in volleyball is finger injuries. Volleyball players use the tips of their fingers often during the game. Tipping balls over the net, reaching for out of reach balls, and hitting are all part of the game, but may increases the risk of injuries. Blocking balls from the opposing team, digging down to get a spike, or using your fingers to set a ball in the air are all other examples of this.

Dislocating your finger or causing damage to ligaments and tendons is a common thing to happen in your fingers while playing the sport. The key here is to see whether you can bend your finger or not. If you can’t bend it at all, this could indicate you have a significant injury. Again, avoiding moving it at all is paramount as you seek the aid of a professional. If it is merely stiff, then getting an ice pack on it could help decrease the amount of time it takes to get back into movement again, and lowering your discomfort while this happens.

You can also end up with jammed fingers that could hurt initially, but that might end up being OK in the long run. Usually, this isn’t a major problem as long as you treat it with the “RICE” technique shortly after it occurs. This stands for rest, ice, compression, and elevation. It essentially boils down to making sure you keep the swelling down with ice and then preventing any kind of movement through binding the area with bandages and staying off of it and keeping it up to minimize blood flow.

In the same vein, preventing yourself from injuring toes is also important, especially when you land after jumping. This could be less of a problem if you are primarily playing on sand, but any kind of hard surface, such as a gym floor or anything similar could make the injury worse. This is especially the case if you’re playing on a beach that hasn’t been cleared properly of rocks. Extending the toe in the wrong direction can cause damage to the muscles and ligaments.

Wearing the right footwear can help to ensure that you either don’t incur an injury in the first place or that, if you do have one, it won’t be aggravated. It needs to be stiff enough so that your toes won’t move too much inside, even if you land toe first after a tall jump. Avoiding this is especially important if you are playing on a hard surface. Wraps might help to bolster your toes if this is a problem for you.

In particular, volleyball can cause you to end up with patellar tendonitis. This is when the tendon that connects your knee and shinbone becomes inflamed. If you’re relying on your knees often for activities that require sudden force, such as jumping, you could cause inflammation to your knee. This is especially the case if you have to perform this action over and over again.

Volleyball certainly requires you to put a lot of power into jumping often during the game, similar to when you quickly get your hands up over the net in order to block someone’s shot from the other side. Another example is when you want to get high enough to spike the ball.

You can get special straps for aiding with this particular type of tendonitis. It helps to relieve stress on the tendon. This is often the starting point before other forms of treatment, if you’re feeling strain in your knee. You can simply wear the strap until you’re out of the danger area and your knee is back to feeling normal again. If you wear the strap and you avoid being too strenuous with jumps, focusing more on lighter work in the back line than on anything that requires you to jump and put a lot of pressure on your knee such as many of the activities you would be doing right near the net. If the strain becomes enough, you’d be well advised to take a break from playing altogether until you have control of it again.

Overall, it’s important to keep an eye on common areas of strain for those who play the sport including your fingers, toes, knees, and ankles. If you’re watchful enough, you can often prevent serious injuries before they occur. For more information about volleyball and other types of sports injuries, please contact us today.