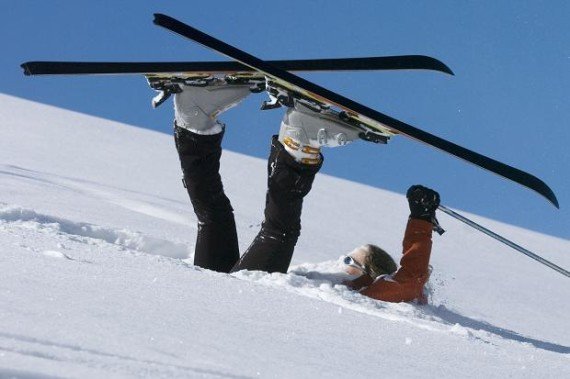 When the winter snow begins to fall, millions of people don’t let it put a damper on their game. Instead they dust off those skies, sharpen those skates, and break out the hockey gear to embrace the cold. However, while the snow can cushion a number of bad falls, winter sports injuries are still common. The most common winter sports injuries, if left untreated and simply walked off, can even take you out of the game long into the warmer months. For those looking to head out their next winter adventure, be sure to be prepared for these three common winter injuries.

Conservative estimates have found that every day around 25,000 Americans sprain or fracture their ankle to varying degrees of severity. In warmer weather, this comes from walking on uneven surfaces or a nasty trip and fall, but ankle sprains and fractures are just as common in the winter months. In fact, the ankle movements that cause sprains are so common when snowboarding that the fracture of the Talus bone is widely referred to as Snowboarder’s Ankle.

Whether you roll your ankle on the slopes, fall from a loosely bound skate, or simply slip on a patch of ice, an ankle injury is likely to put a the freeze on the rest of your winter adventures. Fractured ankles will require a cast for up to six weeks while a mild sprain can be treated with ice and elevation. However, either injury can start treatment outdoors with the addition of an ankle brace into your first aid kit. A brace will keep the ankle stable, immobilizing it and prevent exacerbating the injury further as you seek medical attention.

Moving up the leg, knee injuries are common amongst everyone from skiers to hockey players. As the knee absorbs the shock to the body during simple activities like walking, imagine just how much shock is being absorbed when shredding down fresh powder. Knee injuries are a frequent worry in the winter not just because they can happen in any winter sport, but because there are so many different ways to injure the knee.

Some of the most common knee injuries during winter sports include:

A knee injury is one that, if not properly treated, will follow you for the rest of your life. For those that have already endured a knee injury, it is important to take proper measures before heading out for a day of fun. Weak, sore, or previously injured knees need to be taped or put in a brace so as to not aggravate the condition further so you can keep having fun without the pain.

Skiing is the only winter sport in which you regularly use your hands and wrists for something other than breaking your fall in the snow. As a result, these areas are more prone to injury than people might think. The most common injury in the area – a torn ligament in the thumb – has even come to be known as Skier’s Thumb.

Next to knee injuries, skiers will find that skier’s thumb is the most common injury they will have to endure during the winter months. The tear in the thumb ligament typically occurs when a skier falls, bending their hand back to grip the ski pole, causing the ligament to tear and, in some cases, the thumb bone to fracture. For particularly bad falls, skiers may also find their wrist bending backwards, causing a sprain of fracture in the wrist bone as well. Skier’s Thumb has become such a problem that many have taken to preventative measures just to not have to suffer another season of it. Using tape or a sturdy brace that holds the thumb in place, preventing it from bending backwards has seen reports of this injury drop in recent years, allowing more skiers to enjoy the slopes longer into the season.

Concerned about an injury freezing you out of the fun this winter season? Contact us to see what gear you can utilize to prevent old injuries from flaring up or new injuries from happening.