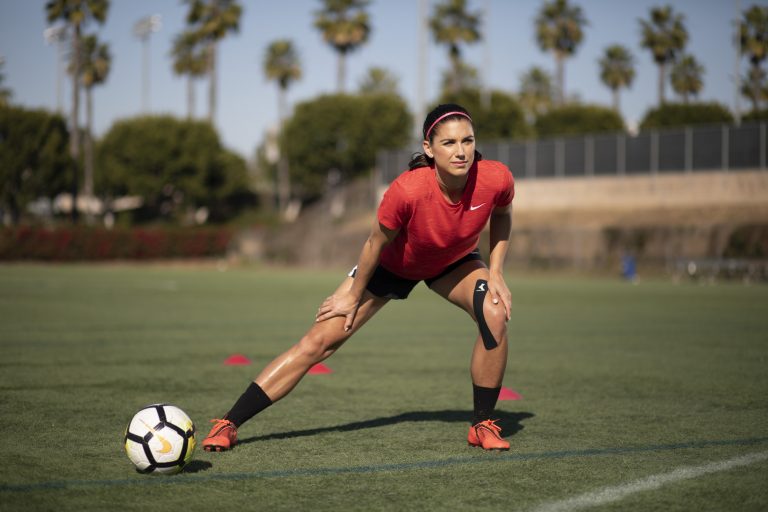 Mueller Sports Medicine is pleased to announce that Alex Morgan, an outstanding member of the U.S. Women’s National Soccer Team, has joined the Mueller Pro Team as a Brand Ambassador for MWrap® and Styling Wrap.

Morgan, who is known for wearing Pink MWrap® in her hair while playing, will represent the product through a variety of marketing efforts across all media.

MWrap was originally developed and marketed as a pre-taping underwrap used to protect the skin from athletic tape. However, in recent years, because of restrictions on hair clips and pins, many female athletes wear it to keep their hair out of their eyes. A similar product was introduced in 2009 under the brand name StylingWrap™ as a fashion-forward solution to hairstyling. Both products are available in a wide variety of colors, however, Morgan has made pink her signature color. She has said that she started wearing pink so that her family could identify her on the field. Since then, she has also said that she wears it to show her “girly side.”

“Alex is an inspirational athlete who has achieved great success both as a competitor and as an individual,” said Brett Mueller, President of Mueller Sports Medicine, said. “She is a wonderful example of the tough, fierce competitive nature of the American female athlete. A rising star with a large number of fans and followers, Alex will be a welcome addition to the Mueller Sports Medicine team.”

Alex Morgan, 22, made her debut for the United States women’s national team in 2010 and quickly established herself as a valuable team member. The youngest player on the US National Team, Morgan came off the bench last summer in five of the six games at the World Cup — scoring in both the Americans’ semifinal win over France and their championship game loss to Japan — but this year she has made a case for a regular starting role with a string of stronger performances. Morgan is the national team’s leading scorer with 17 goals this year and is on her way to become just the sixth U.S. player to score 20 goals in a calendar year.