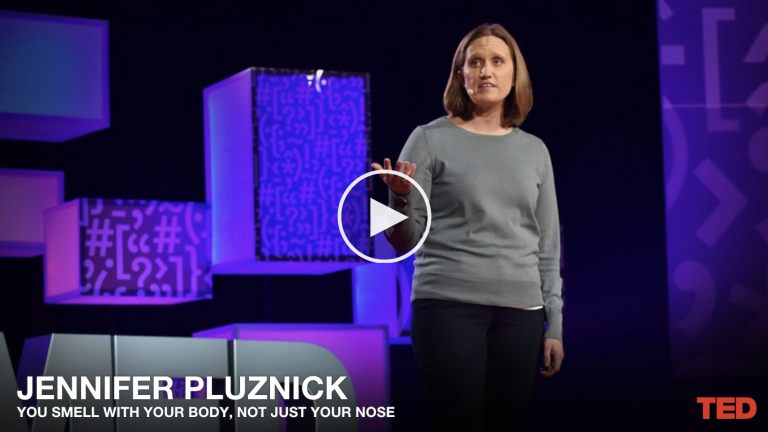 You smell with your body

You smell with your body, not just your nose

You smell with your body, not just your nose.

00:00
Here’s a question for you: how many different scents do you think you can smell, and maybe even identify with accuracy? 100? 300? 1,000? One study estimates that humans can detect up to one trillion different odors. A trillion. It’s hard to imagine, but your nose has the molecular machinery to make it happen.

00:32
Olfactory receptors — tiny scent detectors — are packed into your nose, each one patiently waiting to be activated by the odor, or ligand, that it’s been assigned to detect. It turns out we humans, like all vertebrates, have lots of olfactory receptors. In fact, more of our DNA is devoted to genes for different olfactory receptors than for any other type of protein.

01:03
Why is that? Could olfactory receptors be doing something else in addition to allowing us to smell?

01:13
In 1991, Linda Buck and Richard Axel uncovered the molecular identity of olfactory receptors — work which ultimately led to a Nobel Prize. At the time, we all assumed that these receptors were only found in the nose. However, about a year or so later, a report emerged of an olfactory receptor expressed in a tissue other than the nose. And then another such report emerged, and another. We now know that these receptors are found all over the body, including in some pretty unexpected places — in muscle, in kidneys, lungs and blood vessels.

01:58
But what are they doing there? Well, we know that olfactory receptors act as sensitive chemical sensors in the nose — that’s how they mediate our sense of smell. It turns out they also act as sensitive chemical sensors in many other parts of the body. Now, I’m not saying that your liver can detect the aroma of your morning coffee as you walk into the kitchen. Rather, after you drink your morning coffee, your liver might use an olfactory receptor to chemically detect the change in concentration of a chemical floating through your bloodstream.

02:39
Many cell types and tissues in the body use chemical sensors, or chemosensors, to keep track of the concentration of hormones, metabolites and other molecules, and some of these chemosensors are olfactory receptors. If you are a pancreas or a kidney and you need a specialized chemical sensor that will allow you to keep track of a specific molecule, why reinvent the wheel?

03:07
One of the first examples of an olfactory receptor found outside the nose showed that human sperm express an olfactory receptor, and that sperm with this receptor will seek out the chemical that the receptor responds to — the receptor’s ligand. That is, the sperm will swim toward the ligand. This has intriguing implications. Are sperm aided in finding the egg by sniffing out the area with the highest ligand concentration?

03:41
I like this example because it clearly demonstrates that an olfactory receptor’s primary job is to be a chemical sensor, but depending on the context, it can influence how you perceive a smell, or in which direction sperm will swim, and as it turns out, a huge variety of other processes. Olfactory receptors have been implicated in muscle cell migration, in helping the lung to sense and respond to inhaled chemicals, and in wound healing.

04:17
Similarly, taste receptors once thought to be found only in the tongue, are now known to be expressed in cells and tissues throughout the body. Even more surprisingly, a recent study found that the light receptors in our eyes also play a role in our blood vessels.

04:38
In my lab, we work on trying to understand the roles of olfactory receptors and taste receptors in the context of the kidney. The kidney is a central control center for homeostasis. And to us, it makes sense that a homeostatic control center would be a logical place to employ chemical sensors. We’ve identified a number of different olfactory and taste receptors in the kidney, one of which, olfactory receptor 78, is known to be expressed in cells and tissues that are important in the regulation of blood pressure. When this receptor is deleted in mice, their blood pressure is low. Surprisingly, this receptor was found to respond to chemicals called short-chain fatty acids that are produced by the bacteria that reside in your gut — your gut microbiota. After being produced by your gut microbiota, these chemicals are absorbed into your bloodstream where they can then interact with receptors like olfactory receptor 78, meaning that the changes in metabolism of your gut microbiota may influence your blood pressure.

05:59
Although we’ve identified a number of different olfactory and taste receptors in the kidney, we’ve only just begun to tease out their different functions and to figure out which chemicals each of them responds to. Similar investigations lie ahead for many other organs and tissues — only a small minority of receptors has been studied to date. This is exciting stuff. It’s revolutionizing our understanding of the scope of influence for one of the five senses. And it has the potential to change our understanding of some aspects of human physiology. It’s still early, but I think we’ve picked up on the scent of something we’re following.